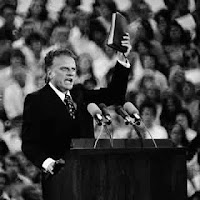 OK so I never met the man. In fact the closest I ever came to him was at Arco Arena many years ago when he led a crusade in Sacramento. I never even saw him in person as I was outside in the parking lot watching the whole thing on a JumboTron.
I HAVE met Bob Mitchell though! Bob, former President of Young Life, came and spoke with our region at Woodleaf here in CA just the other day. He recounted the story that affected me profoundly.
Bob began his journey with Christ under Jim Rayburn at Young Life club 37. This is funny because even though it was called 37 it was actually the first Young Life club way back in the early 40's. Bob was 13 when Jim led him to Christ and of course Jim Rayburn's legacy is that of countless others led to Christ. He is certainly worth another whole discussion but for now I want to focus on Bob and Billy. You see when Billy asked Jim for help working with the kids that were coming to Christ through his ministry, Jim sent Bob. Bob is to this day one of the most prolific leaders Young Life has ever seen and will undoubtedly be greeted by stadium cheers when he gets to Glory.
When Bob was asked to become President of Young Life, he didn't want to jump into the position without seeking counsel so he called Dr. Graham. Of course it wasn't the easiest thing to do, to get a hold of Billy Graham, but because of their relationship in the past, Dr. Graham agreed to host a meeting in Toronto, Canada.
They met in Billy's hotel room and after some discussion Billy dropped to his knees. This is where it gets good. As Bob was retelling this story you could see the profound nature in which Bob was affected. Dr. Billy Graham on his knees at the feet of Jesus pouring out his heart for the kids that would be reached by the ministry of Young Life. What was clear to me was that Billy's emphasis during his prayer was not about Young Life but it was about the Love of Jesus. Bob said... "When this man prayed, you got the feeling that God was LISTENING!" WOW! Billy continued his prayer with supplication over his own son Franklin who was struggling with his own salvation back then. Fast forward you know that Franklin is now carrying on Billy Graham's legacy at BGEA.
What I love is that Billy Graham, Jim Rayburn, and Bob Mitchell, 3 Giants of the faith... their core emphasis is focus on Jesus. You as an individual... focus on Jesus and everything big or small will line up.
Posted by Jonnymocha at 12:52 AM